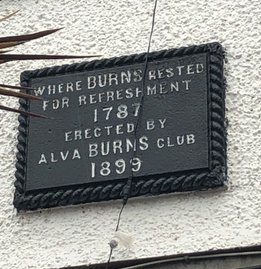 "On Friday 29th September 1899, a memorial was unveiled at the new No5 public house in Alva to commemorate Robert Burns."

Our Alva lies at the foot of the Ochil Hills where the Alva Burn runs from the Alva Glen. Water has always been a valuable resource and once it’s power was harnessed, which in Alva's case happened early, a settlement with a church was established in 1260 although control was granted to Cambuskenneth Abbey near Stirling. After the Reformation, the local estate was brought under the ownership of the Erskine family whose residence in the area was a tower house built just to the east of the town. In 1636 Sir Charles Erskine developed this into the much larger Alva House.

Throughout the 1700’s, Alva expanded considerably especially when silver was found in Alva Glen and a mine was opened by Sir John Erskine to exploit it, using miners from Leadhills. The ore that emerged was the purest ever found throughout Great Britain and made Erskine's fortune. At its peak of production in the years around 1710, silver to the value of £4,000 per week was being taken from the mine.

The first of Alva's modern style woollen mills was established in 1798 on the banks of the Alva Burn, and other mills quickly followed. The largest of Alva's mills, the Strude Mill, began work in 1825 and remained in use as part of a larger complex until 1976. Unfortunately, the textile industry in Alva diminished dramatically in the second half of the 1900’s. By the early 1800s Alva House had been purchased by the Johnstone family. They greatly expanded it in about 1820. The house passed to Miss Carrie Johnstone in 1890, but on her death in 1929 it could not be sold. It was destroyed during target practice by the military during World War II.